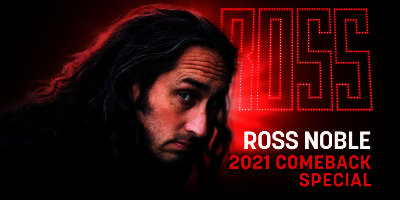 COVID19 forced Noble off the Road for the first time in years. He's chomping at the bit, he's raring to go.

Get your tickets now for his Comeback Special.

Each year and each show have seen Noble's live following grow to the point where he has been the best-selling show at both the Edinburgh Festival and Melbourne International Comedy Festival on more than one occasion. His shows have transferred to London and Sydney each year since 2003 and venues have grown in size to accommodate his ever-growing audience.

Ross Noble is now perhaps the most successful cult comedian of our time, with a loyal fan base derived largely from the 'word-of-mouth' recommendations of those having seen him perform live. With an on-stage presence like no other, his exuberance, spontaneity and cerebral style have established him as one of the World's best-loved comedians. Freewheeling and off the cuff join the master surrealist as he uses an infinite imagination and plenty of tomfoolery in a night not to be missed.

"His first act last night was one of the most brilliant hours I have ever spent in a theatre... and the second even better." -Daily Mail